“Les Créations” supports the “In memory of me” project

“Les Créations” supports the “In memory of me” project by the visual artist, Stéphane Simon

The “Les Créations” division of Initial, subisidiary of Prodways Group — specially dedicated to the luxury, design, art and architecture sectors through exclusive, unique and tailored 3D printing designs — recently signed an industrial partnership with visual artist Stéphane Simon as part of the launch of his “In memory of me – towards a new gesture catalog” project.

Stéphane Simon has worked as a visual artist for over 20 years, focusing mainly on the representation of the human figure. The idea for his sculpture project was born in Barcelona in 2013, where the artist goes regularly to develop new research avenues. At the time, the 3D printing techniques available on the market were not advanced enough to obtain a perfectly reproduced gesture. In addition to targeting cutting-edge technology, Stéphane Simon has initiated numerous exchanges with anthropologists, sociologists, art historians, photographers, communications and language science experts, physicians and digital technology specialists in order to explore and ponder the multiple dimensions of the work. These are the true reflections of our current society, to which the artist is particularly attuned.

Two years later, 3D printing techniques have been perfected, and the meeting between the artist and the industrial group, Prodways, with its subsidiary, Initial, has enabled the project’s feasibility to be reconsidered. Thanks to the technologies available in Initial’s workshops, it is now possible to reproduce the complexity of gestures in movement in absolute perfection.

Through this technological and artistic partnership, the visual artist, Stéphane Simon, can draw on Initial’s experience of more than 25 years and its unrivaled expertise in 3D printing.

“In memory of me”, a project with universal resonance

We have entered the digital era. No one can deny that we are experiencing a major revolution that affects the very nature of our human behavior a little more every day. In our current environment, which focuses on visual and virtual approaches, we are submerged by images and the recent phenomenon of the selfie. In a short span of time, self-portraits have become a genuine mass phenomenon and reveal a transformation in the very status of the subject. In reality, the widespread practice of the selfie reflects a major anthropological shift throughout the world. Mobile telephones have become a true extension of ourselves and this widespread practice of the selfie questions the place, use and strength of the image in our contemporary societies. 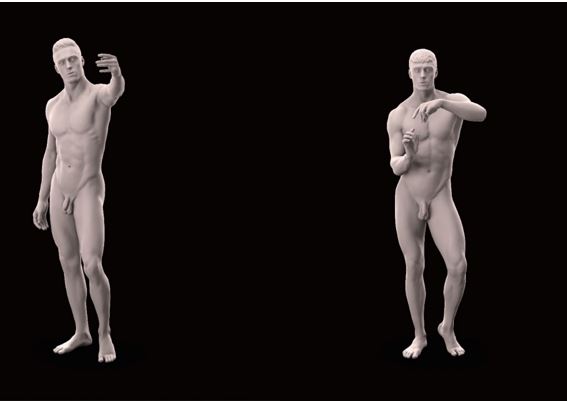 Selfies have become an essential ritual, supporting the emergence of a whole new catalog of gestures in movement, incorporating expressions meaning and use at a level unparalleled in the history of humanity. A universal, non-verbal communication medium has been born.

This form of communication, adopted by all worldwide like no other practice or mode of expression before it, has myriad and powerful social, societal, economic, political and medical repercussions.

It also has the visual and artistic qualities that the full-body sculpture (human size 5 feet and 11 inches), chosen by Stéphane Simon as a medium of expression, is today able to relay by generating beauty, poetry, strangeness and a connection to spectators who can project and recognize themselves in the work, whatever their origins. 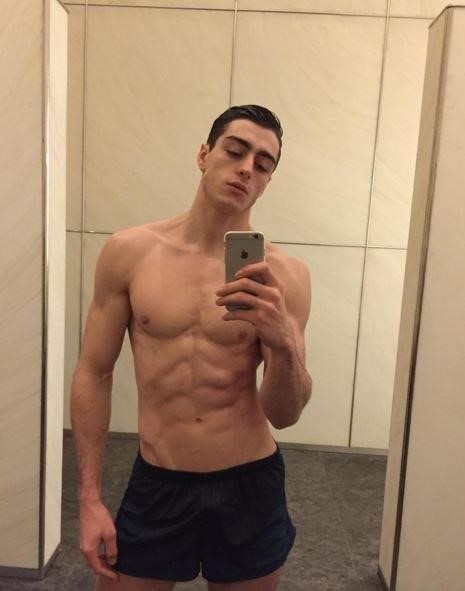 Andrés Sanjuan is 19 years old. Scouted by the agency Sight Management for his exceptional physique, he began a career as a professional model at the age of 16. A student in Visual Arts, he has begun to study architecture with the strong ambition to create new sustainable and environmentally-friendly housing. At the same time, Andrés Sanjuan works his body like a work of art and with a determination and regularity that make him highly coveted by the most prominent global brands and see him walk runways worldwide. His latest series of photos by the photographer Steven Klein appeared in Vogue Italy magazine in August 2016, showcasing an almost perfect figure. A photographer himself, with an extremely developed eye and a natural feeling for art, Andrés Sanjuan is passionate about contemporary art. Coming from a generation born in the digital era, he takes selfies and felt closely connected to Stéphane Simon’s project, with which he immediately identified.

Stéphane Simon is a visual artist. The 45-year-old lives and works in Paris and has drawn and painted for over 20 years, producing visual work focused on the representation of the body and face. He has taken part in many collective and personal exhibitions; the last one was held in Paris in 2014, with the presentation of recent works performed exclusively on paper. His work is featured in several private collections. In 2013, he decided to move into sculpture drawing on fast-developing 3D printing technologies, thereby opening up new prospects for formal productions and leading him to acquire new technical skills. The meeting with Initial would be significant in ensuring the feasibility and realization of his project “In Memory of Me”, which required over 3 years of development.

Originally from Nancy, France, Stéphane Simon was born into a family of fine woodworkers. He was particularly influenced in his graphic work by the expert technique of Nancy engravers Jacques Callot and Bellange, recognized in the 16th century for their exceptional dexterity. Stéphane Simon also expresses strong admiration for the Nancy school of artists (Gallé, Vallin, Majorelle, Daum, etc.), whose avant-garde spirit and constant research are exemplary, as well as the work methods of the designer Jean Prouvé, whose drawings and design methods he studied with a great deal of attention.

Combining hi-tech expertise with skilled craftsmanship, Initial, subsidiary of Group Prodways, has produced original 3D printed parts over the last 25 years for its 150 clients in the luxury, design, art and architecture sectors through tailored, exclusive and unique designs.

In May 2016, to build on its know-how, Prodways Group launched “Les Créations”. This division was created to meet the specific requirements of designers while drawing on the recognized skills and expertise of Initial in highly demanding industrial segments, such as the aeronautics, space and automotive industries, representing more than 4,000 clients over 25 years.

“Les Créations” supports clients from the development of the very first sketch through to delivery of the 3D-printed object. Applying the utmost precision, and famous for their expertise and discretion, “Les Créations” manufactures prototypes, molds, one-off parts and also pre-series and series parts. Tailored and hand-crafted finishing techniques are also applied in the Initial workshops.