In a joint project focusing on incorporating 3D printing technologies into the production of plastic injection molds, Prodways Technologies, Openlab by Schneider Electric and the Platinium 3D platform are teaming up to accelerate the development cycle of industrial products. 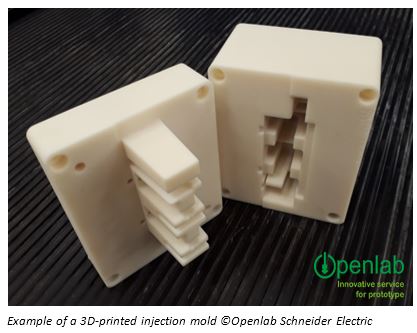 One of the major challenges for the Industry of the Future will undoubtedly be to release new products onto the market faster in order to stay competitive. At the same time, international standards and certification requirements burden electricity manufacturers with long certification processes for their components, which must be produced using final material prototypes. In order to reduce time to market, the R&D departments of electrical component manufacturers such as Schneider Electric, a global leader, need to produce their prototypes fast in order to obtain certification and perform functional tests with the final material. Consequently, the challenge is to be able to break free of traditional tooling – a long, expensive process – by creating the prototype molds through 3D printing and to then inject final material parts and speed up the iterations needed to get certified before producing the final production mold.

With nearly 400 product launches per year and revenue in excess of €24 billion in 2017, Schneider Electric has placed strategic importance on technological innovation focused on improving time to market. To achieve this, Schneider Electric utilizes its Openlab, located in downtown Grenoble, to support development projects for new offers.

To quote Frédérick Choupin of Schneider Electric: “Our goal is to use cutting-edge technologies to shorten the product development cycle. With 3D printing and agile project management, we’re in a position to overcome the traditional obstacles of long-established processes and market an innovative product 60% faster.” 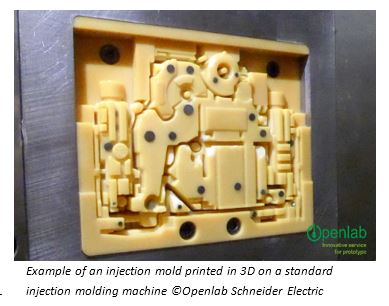 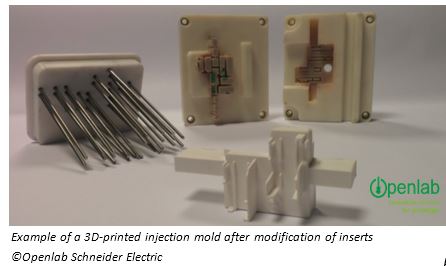 With this in mind, Openlab by Schneider Electric has been working with Prodways Technologies and the Platinium 3D technology platform for over a year to incorporate MOVINGLight® technology into the development cycle of its electrical components in order to print plastic injection molds in 3D. Ultimately, nearly 25 tooling molds were printed in 3D, and as a result, hundreds of parts could be injected on an injection molding machine under manufacturing conditions in order to create parts that matched the final shape and complied with the certification prerequisites with the correct polymer grade.

Sébastien Guenet, Deputy Executive Officer of UIMM Champagne-Ardenne (Champagne-Ardenne Union of Metallurgies Industries), Platinium 3D, said, “Typically, producing an aluminum mold for tooling prototypes of parts that need to be certified as final material has a lead time that can range from several weeks to two months, and that drastically slows down the development cycle. With 3D printing, we can produce tooling prototypes in a few hours, modify them immediately based on the needs of the functional tests and then inject final material parts. These final material parts are sent directly for certification while the aluminum mold is still being produced. Thanks to this process, we considerably speed up the new-product development cycle since the final material parts are already certified even before the aluminum production mold is finalized.“

Thanks to Prodways’ 3D printing materials that boast high mechanical and heat resistance, Openlab by Schneider Electric and Platinium 3D have injected charged and nonflammable polyamide parts. Glass-charged polyamide is one of the most commonly used materials for technical components where heat resistance is mandatory; it is standard for many industries and an indispensable prerequisite for obtaining certifications.

3D printing, which is essential for developing industrial products, is therefore poised to play a key role in the growth of the businesses of the future. Through this partnership, Prodways Technologies, Openlab by Schneider Electric and Platinium 3D are reaffirming their central role as trailblazers paving the way to innovation in French industry.